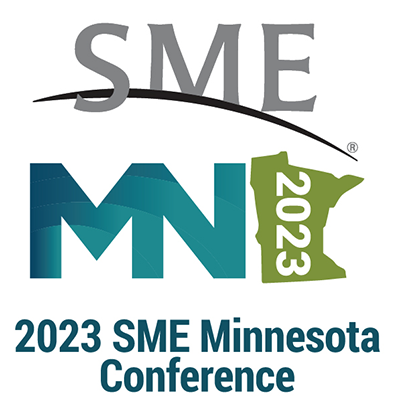 Short Courses are developed specifically for the minerals professional. These courses provide professional development that is part of the path to a successful career. Take advantage of the short courses offered in conjunction with the SME MN Conference and enhance your career trajectory.

Bio: Travis Davidsavor is a Vice President, Principal, Senior Geotechnical Engineer, and Blasting Engineer at Barr Engineering Co in Duluth, Minnesota. In addition to that full time job, Travis is also an adjunct faculty member in the Civil Engineering Department at the University of Minnesota Duluth. Travis earned his BS and MS in Civil Engineering from Michigan Technological University where his research focused on studying the effects of blasting on recently placed concrete. He is a licensed professional engineer in 14 states and two Canadian provinces and provides consulting engineering services in rock blasting design, highwall stability, vibration mitigation, high-consequence blasting, and vibration monitoring. He serves the mining, pipeline, power, and construction industries across the United States with his blasting and vibration experiences. Travis was elected to the ISEE Board in 2020 and chairs the Emerging Professionals Section and served on the Urban Blasting Committee of the ISEE. He is a member of the Seismograph Section and spearheaded the development of the Explosives Everyday! webinar series. Travis received the ISEE President’s award in 2017 and coauthored the ISEE Paper of the Year in 2020 which covered the measurement of in-operation transmission pipeline stress while blasting occurred immediately adjacent to it.

Bio: Jack Eloranta is the principal in the consulting firm, Eloranta & Associates Inc. His introduction to explosives started at an early age observing his father removing stumps from farm fields. He received formal training with explosives as a combat engineer in the U.S. army at Fort Leonard Wood Missouri. He holds undergraduate degrees in Geology and Mining plus a Master’s in mining, all from the University of Wisconsin. His Master’s thesis describes the implementation of the first ever downhole probe for magnetite. He worked 22 years for U.S. Steel Corporation in iron ore at the Minntac Mine. In 1981, he was a part of a haulage study and helped designed a movable crusher and conveying system which required an in-depth review of rail, truck and conveying options, touring mines across North America. Jack’s other work for U.S. Steel includes serving as front-line foreman for the Track Department and Truck Production, supervising railroad construction, maintenance crews, and heavy equipment operators. As a mine engineer for operations and long-range planning, he supervised survey crews and was involved with ore blending, geological studies, engineering roads, dumps, and drainage. He is proficient in the use of Caterpillar software, Fleet Productivity and Cost (FPC) and has used it for feasibility studies for mine startup equipment selection. In 1984 he became the blasting engineer where he designed layouts for over a half billion tons of taconite blasting. In 1999 he formed his own company where has optimized blasting for operations using: conventional, semi-autogenous and fully autogenous mills. Clients include: quarries, gold, copper, iron ore, coal and construction plus expert witness and university research. His work has taken him to international clients in: Canada, Panama, Peru, Australia, New Zealand, Senegal, South Africa and Sweden. In 2008 he served as CEO of the Lehigh Coal and Navigation Company. He has authored some 30 papers on mining and blasting and revised the International Society of Explosives Engineers (ISEE) Handbook for open pit and quarry operations. He was a founding officer and a five-term president of the Lake Superior Chapter of the ISEE. In 2004, he was awarded the President’s Award by ISEE for meritorious service to the explosives industry. He is a member of the Society of Mining Engineers.. In 2005, he was elected to the board of directors of the ISEE and progressed to the presidency. He is a pilot and a twenty-gallon blood donor.

Don't miss this innovative conference! Sign Up for News

This is just a sample…